Embracing Technology to Pay Homage to an Old Friend

When the town of Bingen, Washington wanted to commemorate the life of resident Guillermo “Willie” Fisch, sculptor Doug Granum was up for the challenge. “He was a really good friend of mine,” Doug says of Willie, an Argentinian architect who moved to Bingen to work on drones. “He was a real outlier, and he really became a fixture in the town.”

Willie, who would walk the streets of Bingen in a beret with a cigar, instantly became a popular local. He’d host weekly “503 Club” wine nights—beginning at 5:03 p.m., of course—and was frequently found singing and dancing with friends. With this boisterous personality in mind, Doug knew he wanted to sculpt a lively, animated piece to pay homage to his friend, who passed away after battling pancreatic cancer. “We didn’t want it to be static because that’s not who he was,” he says. 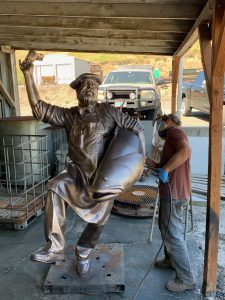 Doug, who we’ve worked with on several other projects, came to Form 3D Foundry to work on the project from start to finish. We started by creating a bronze maquette (a rough scaled sculpture), then scanned it into the computer to make minor changes before printing the full-size model. Doug says that although many traditional artists are afraid of using technology to enhance their work, he views it as a way to only enhance the process. “Artists have seized on new technology,” he says. “But once you get it into the computer, you’ve got all the latitude in the world to do what you want to do.”

Once the design was completed to Doug’s liking, it was time to create a larger model. Doug says that printing the large model—instead of sculpting himself—allows for far more precise construction. “Traditionally, lost wax casting was what everyone, myself included, used,” he says. “But it’s hard to get all of the walls the same thickness. With 3D technology, the wall thickness is absolutely uniform, and all of the pieces go together like a Swiss watch. It’s a magnificent way to create really unique sculptures.”

For Doug, working with Form 3D just makes sense. “For years and years, I did it all myself,” he says. “But when you’re working with a team, you can get a lot done. They’re a really talented group of individuals.”