Last year, we were approached by the Smithsonian’s Apollo at the Park, a celebration of the 50th anniversary of the moon landing, to create a replica of Neil Armstrong’s famed Apollo 11 spacesuit. 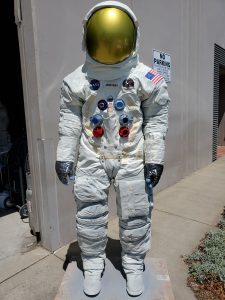 It’s no secret that spacesuits aren’t particularly small, nor are their features simple. Armstrong’s Apollo 11 suit, which is on display at the Smithsonian, is no different—intricate stitching, complicated valves, and creased fabric meant reproduction wasn’t going to be a simple job.

But thanks to our proprietary printing method, which involves special pre- and post-processing techniques, Form 3D was the best choice globally to achieve a detailed project at this scale. “Other companies have the same printer, but they don’t use it the way we do,” says Libby Carruth, lead sculptor. “We’ve worked really hard over the past several years to fine-tune our process and come up with new, proprietary ways to do things.” 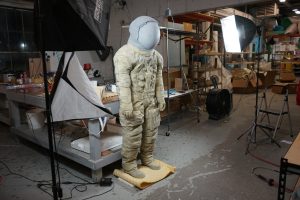 After receiving the high-res scan of the spacesuit, our team cut the file into a grid of printable pieces that could be 3D printed (see below). The spacesuit’s helmet, gloves, and boots were all printed separately from the grid to allow for optimal assembly, and interior ribbed support was added digitally to offer strength and stability. “This is what sets us apart,” says Libby. “We’re always doing what we can to make sure the reproductions we make don’t compromise the original work.” 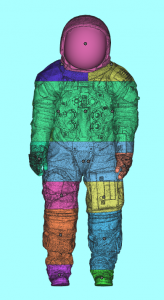 Because our master model was molded to make copies, we infused it with epoxy resin for strength and durability. Once assembled, we patched all of the seams, primed the suit, and gave it a few final touches. “We wanted to make sure there wasn’t any evidence of our process in the final product,” says Libby.  “We didn’t want anyone to be distracted or even think about the process involved.”

After completing the master model, we shipped it off to be rotocast into 15 replica spacesuits, which would go on to be painted and sent off to different baseball stadiums for the Apollo in the Park program. The replicas remained throughout the 2019 season before being sent to various museums across the country.