Warp Speed: How We Put Our Network to Work for Nike

We’re specialists in our field, but we know when to call in help. So when Nike reached out to us to conceptualize a set of eight custom female mannequins in just four weeks, we put our network to work. 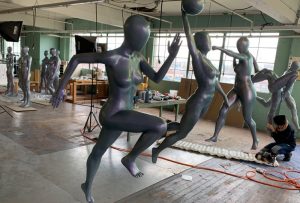 The mannequins, which were to be used in a display at Nike’s flagship store on Fifth Avenue in New York, were a big project as is—but with the addition of a super-tight deadline, it became even more challenging. Eyal Chernichovsky, process engineer and production program manager at Form 3D, knew the project would not only require partnering with other bureaus, but also using several scanning, sculpting, and engineering programs internally. “Having so much technology and so many skill sets in-house allows us to move really quickly,” says Eyal, who used programs like GOM, ZBrush, and Materialise Magics on the project. “When you’re not waiting on another company, [these processes] can sometimes happen in just a few hours.”

To start, we pulled images of real women athletes and categorized them based on bone structure and muscle tones. “We’re all used to this pear shape, or what we think a woman should be, and that’s pretty bad for humanity,” says Eyal. “Instead, we evoked all of these different muscle tones and body shapes. Our designers were very free in the way they were able to associate things.”

When it came time to produce the mannequins—which unlike traditional rotocast plastic, were created from acrylic printed powder and epoxy—we knew we’d have to get creative to achieve a final product in just four weeks. Thanks to a group of 3D printing bureaus we formed a couple of years ago, we were able to access several printing machines across the country. “We fired up about five machines nationwide and managed to print everything within a week,” says Eyal. “It was probably the biggest and fastest 3D printing project happening nationwide, in terms of capacity, speed, and multidisciplinary elements.”

Eyal says it’s Form 3D’s position both with brands like Nike and with other printing bureaus that made this project possible. “Acting as the axis of this project is what allows us to pull something like this off,” he says. “It lets us pull the trigger, even on such a short timeline.”